TFI Leap Card can be used on all DART & Commuter Rail services in the Greater Dublin Area (within the short-hop zone).

The TFI 90 Minute fare now applies journeys made on Dublin Bus, Luas and most DART, commuter rail (zones 1 to 4 in the Short Hop Zone) and Go-Ahead Ireland services in the Dublin City Bus Network when using a TFI Leap Card.

The new 90 minute boundary includes the original zones 1 to 4, covering stations as far as Rush & Lusk to the north of Dublin city, Bray to the south, Hazelhatch to the southwest, Maynooth to the west and M3 Parkway to the northwest. 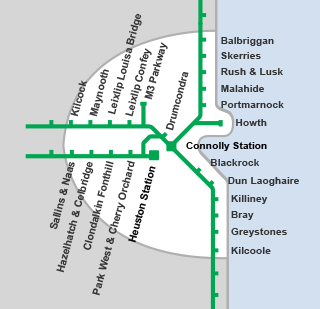 TFI Leap Card can be used to travel on the Cork – Cobh/Midleton commuter services.

Mallow has been introduced into the commuter rail fares area. This means that an adult can travel from Mallow to Cork city or any other station within the Cork commuter area for just €3.90 when paying with TFI Leap Card.

You can check your Travel Credit balance and Top-Up your TFI Leap Card at ticket machines in stations in Dublin (Cork coming soon).